Fallout Gravel Pit Wikia
Register
Don't have an account?
Sign In
Advertisement
in: Factions, Brotherhood of Steel, Fallout: A Wasteland at War

This united Brotherhood of Steel element in Arizona had two ideological thoughts that were representative of the groups which they came from. In the early days of the organization. There wasn't a strict interpretation of how the organization would go forward. Many in the Californian sect were even sympathetic to the reforms of the Texas Brotherhood. The divide was ineffective at keeping cohesion and a central command structure from running the operation. However, the actions of the Elder of this united Brotherhood began to take it's toll.

The new Elder of the barely unified faction became the determining factor which broke the organization into two. While many of the Brotherhood members had worked out their differences and began to accept different views. Elder Narkum began to fracture the security of the organization. Beginning with a trade deal and multiple rendezvouses with the Paradise Casino which is owned and operated by Chloe Harrenhal. An agent of Robert Edwin House and love interest of Luci Narkum began to affect the cohesion of the group. Then Paladin at the time, Chloe Massey began to openly question the whereabouts of their Leader and whether or not it was a good idea to trade secrets and important resources with a representative of an Organization that had wiped our their group in New Vegas. It would only be a matter of time before the crisis could no longer be averted.

Chloe Massey had established herself as the defacto leader of the opposition. Waiting for an opportunity to strike, the time came when massive reforms began getting proposed which would see the whole identity of the Brotherhood changed forever. Soon it would be gone that the organization would protect, preserve, and horde technology instead the new reforms would press them into service as protectors of the people and openly share their secrets. The reforms also addressed manpower issues and would have allowed anyone to come and join. Staggered with all the reforms, the more conservative members of the organization staged a walkout on the organization. They had also attempted to raid the armory as a final act of defiance. A skirmish ensued and at the orders of the Elder, many of the Conservatives elements were wiped out.

Outside intervention began when self declared Sentinel Massey declared over the radio that war crimes had occurred against her own people and requested immediate outside intervention. Intervention was granted almost immediately by the Enclave/Federal Remnant element located at Yuma Proving Grounds which identified itself as the Arizona New State Militia to disguise it's original identity and excuse its prevalent surplus of military armaments. Soldiers, supplies, and armaments were sent North from Yuma.

The deployment of this Arizona New State Militia worried Elder Narkum into believing that without a settlement. The entire Brotherhood of Steel could be rendered dead. Announced over the radio on Chicago Federal Radio. A treaty of separation was drafted in the Penthouse of the Paradise Casino with Chloe Harrenhal and Jeremias Klink as observers and enforces. While the war crimes were never forgiven. For now the Arizona Wastes had peace and the Arizona Orthodox Brotherhood of Steel was created. 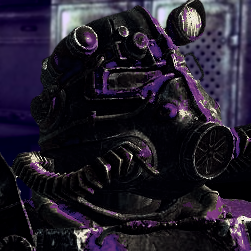 The Separation hardened the resolve of the original Codex and resulted in a reinforced ideology. This Brotherhood closed itself entirely to outsiders. However in a rare exception, it had recruited members from the Midwestern Brotherhood of Steel and other Brotherhood sources to refill it's ranks.

After suffering war crimes it distanced itself to politics to focus itself on the policies of the Codex. Announcing it's neutrality in all affairs unrelated to it's original goals. The organization is more peaceful in comparison but much more hidden and secretive. It has become a shell of it's former strength but has no one directly willing to engage in hostile relations with the organization. It has grown an subsistence industry from their position, producing energy from the nearby river, harvesting subsistence crops, and purifying water. 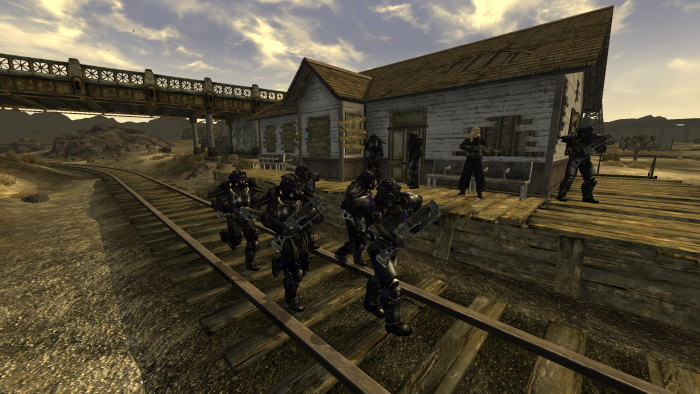 Located inside of a Northern Arizona train station. The fortification is rough with only supplies given by the Arizona 1st Volunteer Infantry. However Brotherhood technology can be seen littering the inside. The station has a basement where most of the logistical network of the Arizona-California Railway held their projects. Information is plenty and preserved meaning they will likely stay in the region for awhile.