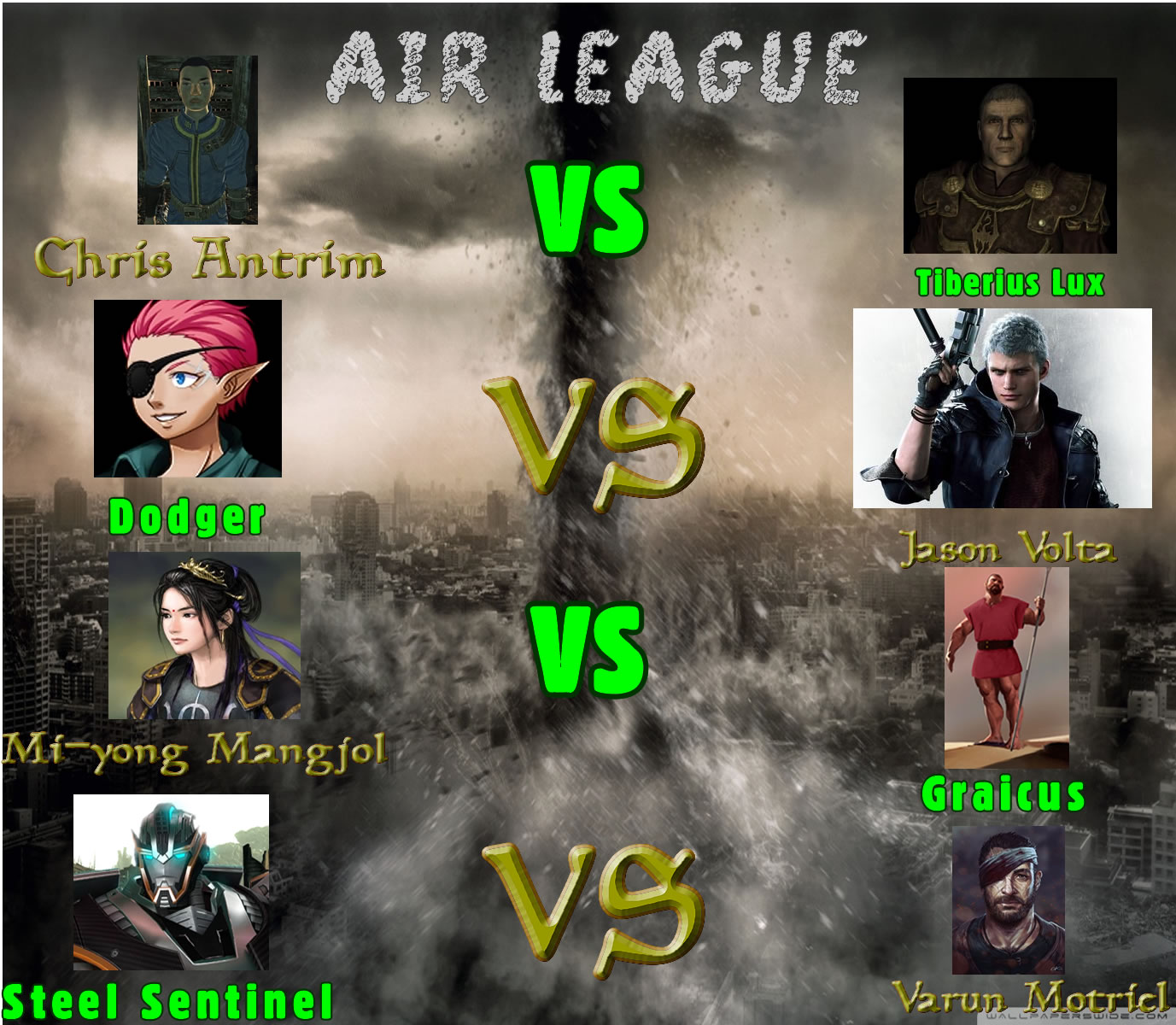 Will these combatants blow us away or dissappear, like a fart on the breeze? That's what the Air League is for, deer audience!

Let us meet our lineup!

Our first contestant is Chris Antrim, the 'esteemed' Lone Wanderer! Formerly a Paladin of the 'Brotherhood of Steel' as well as a Mayor of that 'Megaton' place. Chris is quite an accomplished young man!

Born to two whack-job scientist types, who tried to keep him safe, Chris brilliantly threw all of that to the wind and ran out, into the dying world outside his front door! He has since saved Megaton from a fiery death, inflicted a lot of harm on himself to get some crap book published and has even defeated little green men from other worlds!

Man, this guy has one hell of a resume. Let's just hope that it's not all fluff and that he can actually fight!

His opponent is an accomplished member of the Imperial Legion, a General in fact. After kicking those bush squatting, deer people of the Reech, he retired but kept his eye on the Legion as they found themselves in constant trouble. Unfortunately he wasn't able to abuse his power and get his friend's criminal bastard loose. As a result, they had to try other underhanded tactics. So sad...

So, experience vs age. An interesting bout. Let's hope that it lives up to my... low expectations!

Dodger is a mad, cannibal-elf, who apparently ate her own eye. I guess she was too hungry to wait to get her mits on someone else's She spent a good portion of her life, being someone's pet and then spent the rest of it being someone else's.

She managed to assist the Battlespire incident, proving to be a great asset, with her famed 'Mark of Death' attack. I wonder if it'll serve her well here...

Her opponent is Jason Volta, the soldier equivelant of a whore, who likes to go around, fixing people's junk. He seemingly favours cowboy weapons and possibly a cowboy aesthetic. Jason has apparently had run ins with a Raider called 'Chase the Zapknife.'

He has since earned himself a rather spiffy reputation in a place called 'connect-cut.'

Which of these beloved mercenaries will you cheer for? Hopefully it's the one that loses, that'd be hilarious! Ha!

Coin flip has decided in favour of... Jason Volta!

Our next combatant is an egghead, who also used her 'science' to 'help' others. Urgh, why do all scientists in this universe have to be so disgustingly nice? Can't one do something logical, like clone himself a thousand times and conquer the world?

She actually found herself leaving her little friendship group and has since wandered around, helping those she thinks need help and is apparently helping take care of patients in a place called 'Toronto.'

Her opponent is the brutish Graicus of Anvil, who is no stranger to arenas like these. He even entered the last Golden Ash Yam Tourney! How time flies...

He is still travelling with his group of friends, Marrinthus Thiel and his band of misfits. Hopefully they will stop that vile vampire by the next tourney!

Brains vs Brawn, eh? I do like the classics...

Well, here is a treat, within a treat! A being not of either of our worlds!

That opponent being Varun Motriel, who is a halfbreed duelist, who used to be a big cheese in the Cyrodiilic underworld. He has since taken  a job in some Lord's crime syndicate and has gotten himself incredibly rich. Unfortunately, he grew that horrible cancer known as a 'conscience' on his spine and it wilted it away until he ended up spineless. He tried to leave but his smarter co-workers instead ratted him out to the Aldmeri Dominion, who shipped him off to 'Nightloom.'

Oof... He'll probably want to take the frustrations on someone's face. Too bad his opponent is made of metal, ha!

Polls are closed, get celebrating dammit!

Retrieved from "https://fallout-gravel-pit.fandom.com/wiki/User_blog:Psychomantis108/The_Golden_Ashyam_Tournament_2019_Air_League?oldid=59377"
Community content is available under CC-BY-SA unless otherwise noted.