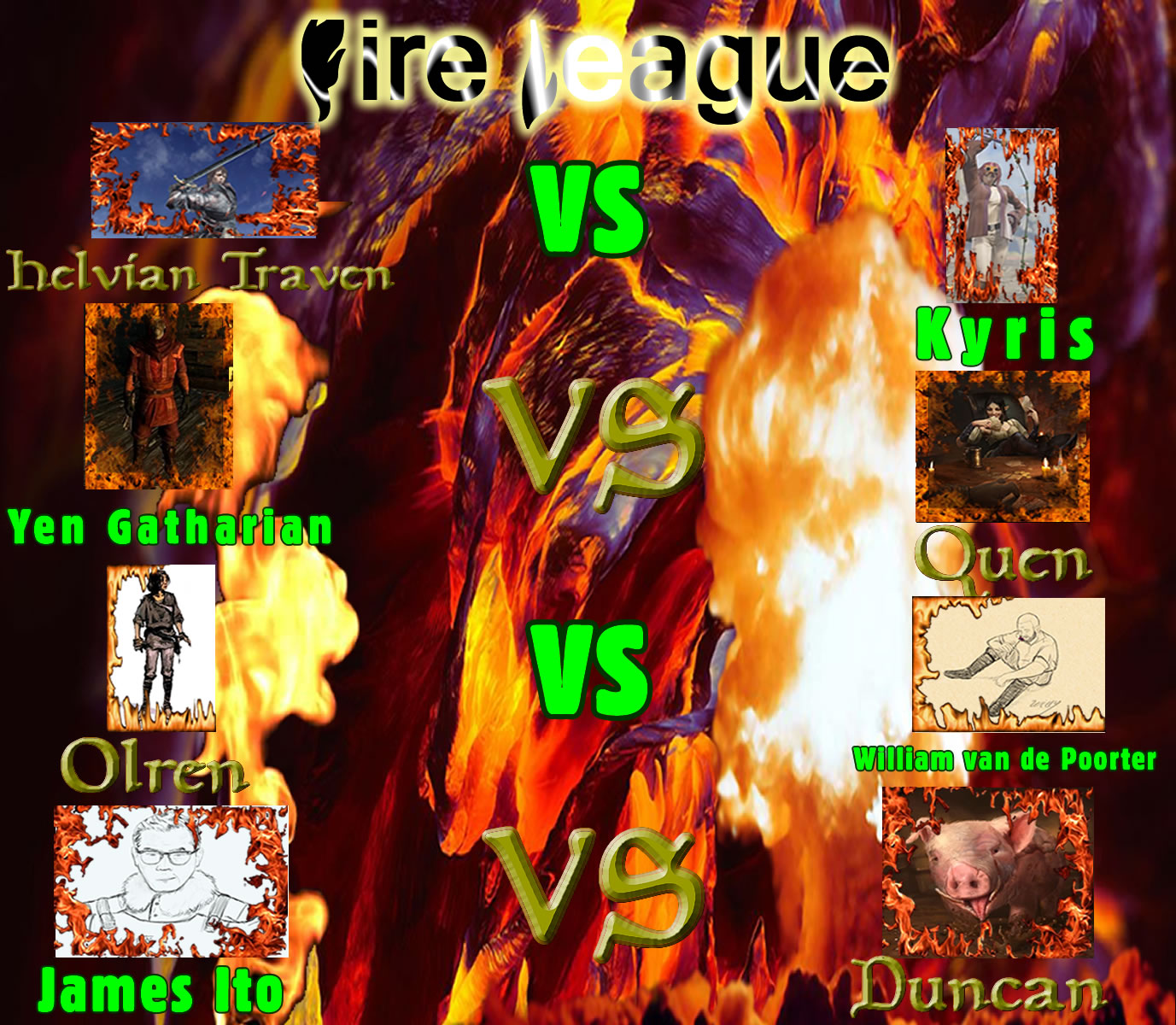 Welcome Pions! It is I, Pritchard! Overlord of the Sandbox Arena!

Yes, I am aware that I don't seem to be doing much announcing these days, at least not since the third Golden Ashyam Tourney but that's because actual Tourniments are dead! It seems almost coincidental that the thing that makes me the most money and requires the least amount of work, which is sitting back on my lorrels and counting my gold, whilst treating my staff poorly and putting out poorly made products is what people really want these days and I just provide.

Now, it's time for the Fire League! I hope you aren't too attatched to your eyebrows!

Helvian Traven is no stranger to the arena, a Night Owl, who squats in ruined manor houses, to avoid paying rent or morguage. She likes to pretend that she is a man, to hide her feminine weaknesses, which is a smart move, if you ask me.

She managed to get diseased up, with vampirism. Like most precocious children, she wandered into the mouth of a beast and got chomped. Now she makes every vampire she comes across pay for her mistakes.

Speaking of idiot children, who make others pay for their mistakes, we have Kyris! A small Bosmeri Alchemist, who also got chomped, killing everyone in her family as she got peckish.

She has now got the free reign to make her own terrible choices, like getting romantically involved with a necromancer and a mess of a man, who is still crying over the death of his own idiot child.

So, out of these two cause ditchers, which one will see it through to the end?

I dont' really care, get voting!

Yen Gatharian is a Spellsword, who has a knack for surviving cataclysmic events. Of course, only one can survive the Golden Ashyam Tournament!

He joined the Twin Lamps to help slaves escape in Morrowind, because he likes to be so disgustingly nice to everyone. He later helped Urjorahn take on his grandfather, again out of obligation to make the rest of us look bad.

He'll be going up against Quen, a half person tavern wench, who is the worst parts of a stuck up adventurer. She spends most of her time gambling, drinking, using magic irresponsibly and seducing as many people as she can find.

She at least teaches us the cautionary tale of not touching random daedric relics, found in the Shivering Isles as you may end up with your soul and body split into two and turned into two insufferable twits.

Let us begin the slaugher, shall we? Slaver vs Cannibal, go!

Olren is a scullary maid in the Imperial Palace, who was good enough to know his place and aid Rhaela and Arik Morgan in their escape as their kin were butchered. So thoughtful.

HIs opponent is William van de Poorter, a name that I don't think I could pronounce drunk. This once feared officer of the communist? army, has been reduced to a flower sniffing manchild crybaby, due to the horrors of amnesia. He now goes by the name 'Willy' and is about as harmless as my worthless brother.

Perhaps this is a good matchup, two worthless plebs, with no combat capabilities going head to head. What a delightful spectical this'll be.

I would like to say that we've saved the best for last but I can't even lie about it as you'd see right through it. The next bout is between a nerd and a pig... Gods preserve us.

James Ito is a wheeler dealer con merchant from the... Enn Sea Arr, who tries to trick tribals into trading with him and his puny empire. It is a shame that he is as appealing as an ogre shagging a bee hive. He is a well travelled man, well educated and hopefully he at least knows how to use a weapon or else this will be a very quick fight.

Duncan on the other hand is a runt piglet, who seems to have his entire being twisted by the hazardous air of the other world. He follows his Mistress, Jessica around and uses his annoyingly endearing nature to get his way. He seems to be a very lucky pig and uses his charm and 'personality' to get his way and avoid becoming bacon.

Well, it looks like these two are evenly matched. Let us hope that the one we can legally eat loses.

Polls are now closed! The winnders will go onto the next round!

Retrieved from "https://fallout-gravel-pit.fandom.com/wiki/User_blog:Psychomantis108/The_Golden_Ashyam_Tournament_2019_Fire_League?oldid=59295"
Community content is available under CC-BY-SA unless otherwise noted.