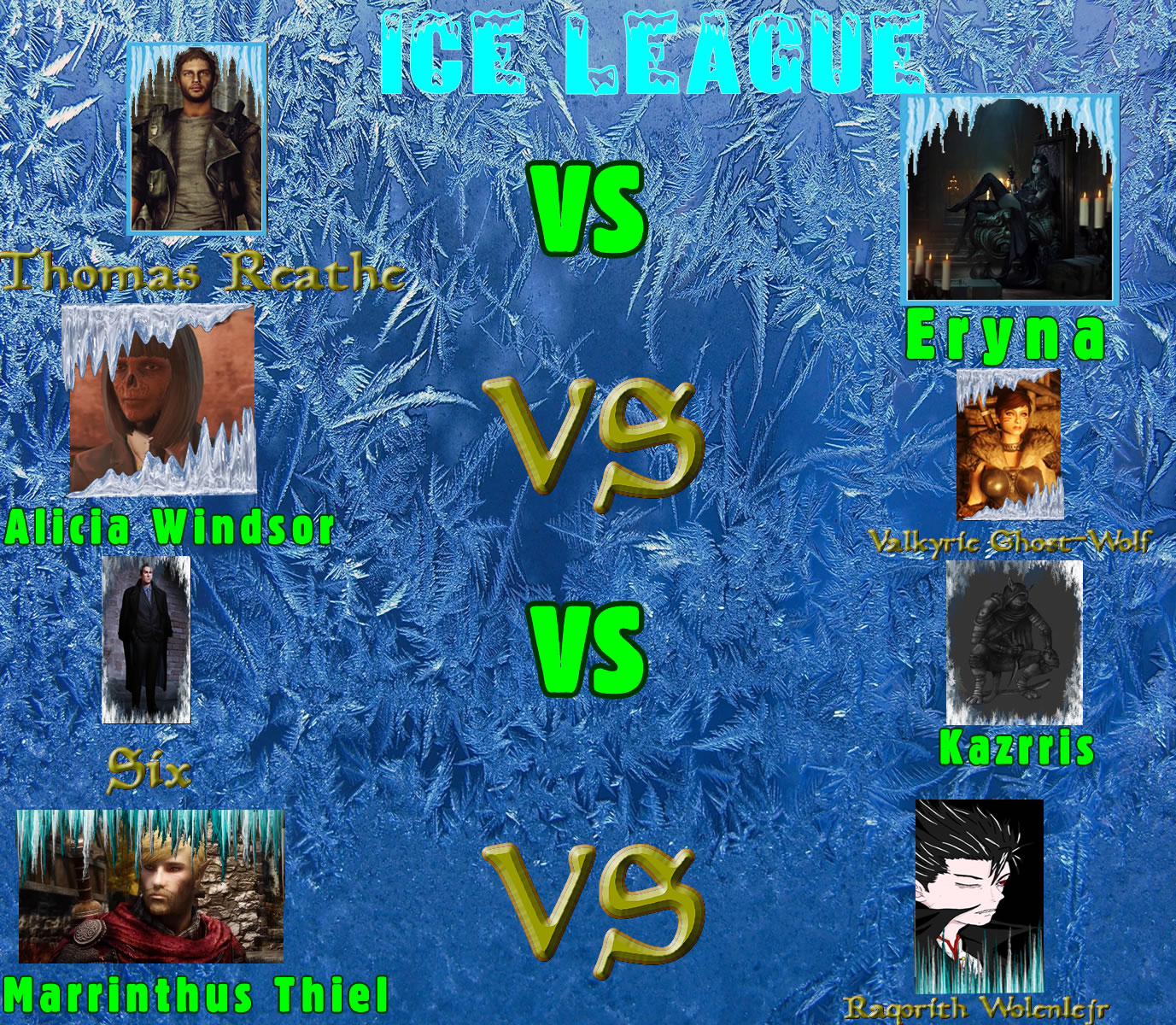 Hello, you snowman with two carrots, it is I, Pritchard!

It is high time that we begin the Ice League! Hopefully finding our chilly champion for this year! Can they hope to stand shoulder to shoulder with previous champions? Well, they better or else.

Ah, starting with a clash of worlds, that is what I'm talking about!

Our first combatant is unfortunate enough to be from the City of Megaton. This guy is so good at killing, he managed to kill his own mother a few minutes after being born. What a champ, we have here! He has since gone up north, to 'Can-aida' to freeze to death. The land is like Skyrim but as big as Tamriel in size. Hopefully, whilst spending his many years surviving in desert and frozen wastelands, he has learned how to actually fight.

Well, good luck with that!

Our second combatant is Eryna, a young Dunmer, who is still trying to figure out how to train her dragon. She is raising a welp dragon, that she found on the hillside and has bonded herself to it, to live forever. How stomach churningly adorable!

Oooh, laddie dah! Here we have the flesh rotten queen of Eng-Land. I have no idea what in Oblivion an 'Eng' is but apparently it is important enough to name a land after.

Alicia prides herself as to being the queen of a land that was scorched off the face of the earth, centuries ago. Oh huzzah. She has survived through the tragedy of her flesh rotting off and becoming a zombie, like an old plague story. She has been doing her best to keep civilization alive in her country's charred remains, which is all anyone can ask of a failed queen.

Next we have Valkyrie Ghost-Wolf, another returning Sandbox Arena candidate. She is a matriarch of Clan Ghost-Wolf, who is my kind of woman. She's pretty and keeps her mouth shut, if only my ex-wife did the same...

Her silence isn't to be mistaken for innocence or anything as she is more than happy to draw her sword and slice, dice and crush you. She has vanquished a great many foes, from assassins to ghosts. Hopefully a frail zombie queen, with a funny accent won't prove too much for her to handle.

Our next match is between an artificial man and a beast man, hopefully this should prove interesting.

Six, is a machine, like the Dwemer have. He was found in 'The World's Fair,' where he stopped a 'terrifying' threat by the name of 'Clive.' Man, that's rivetting. My Uncle was called Clive, that's the least threatening name I've ever come across, whilst doing these.

Right, so after defeating... Clive, Six joined up with a coalition of heroes, to fight the villainous 'Shrike.' At least she sounds intimidating.

His opponent is Kazrris, a Khajiit rogue and an original member of the Heroes Guild. I suppose these two are kindred spirits, afterall. Perhaps they are steered by something similar?

Kazrris has the ability to be invisble, by going into a sort of shadow realm. He'd better not pull that crap here as that's not exactly fair play! Not that I care, it would just make the match shorter and therefore boring.

He was deemed too young to be a part of the important battle he was actually there fore, how embarassing. At least he wasn't almost killed by a bloke named 'Clive.'

And now, we haveKyris' boyfriend, Marrinthus Thiel. The brilliant father, who let his son get kidnapped by a Vampire Lord and killed. Oops. When not being a massive crybaby about it, Marr dedicates his time to hunting down and killing the vampire lord that hurt him and his family. He has been a member of the Imperial secret service for decades now, as an Imperial Inquisition agent. he likes to wave his authority around, quite a bit.

His opponent is a Nemer and a powerful noble vampire, who serves as the prized bitch of the Daedric Prince Malithq. He sees himself as really important, fearing the label of 'commoner.' He is considered anything but as he picked the one faith that whole cabals are dedicated to wiping off the face of the earth. Better luck next time, kiddo. He was fortunate enough to be saved by a real somebody, the prince of transcendance himself and was able to get revenge on those who had him and his family offed.

Hopefully he can win this fight, without having to run crying to his god!

Polls are now closed! Hope you got your vote in! Though I mostly don't care. Tune in to round 2!

Retrieved from "https://fallout-gravel-pit.fandom.com/wiki/User_blog:Psychomantis108/The_Golden_Ashyam_Tournament_2019_Ice_League?oldid=59312"
Community content is available under CC-BY-SA unless otherwise noted.