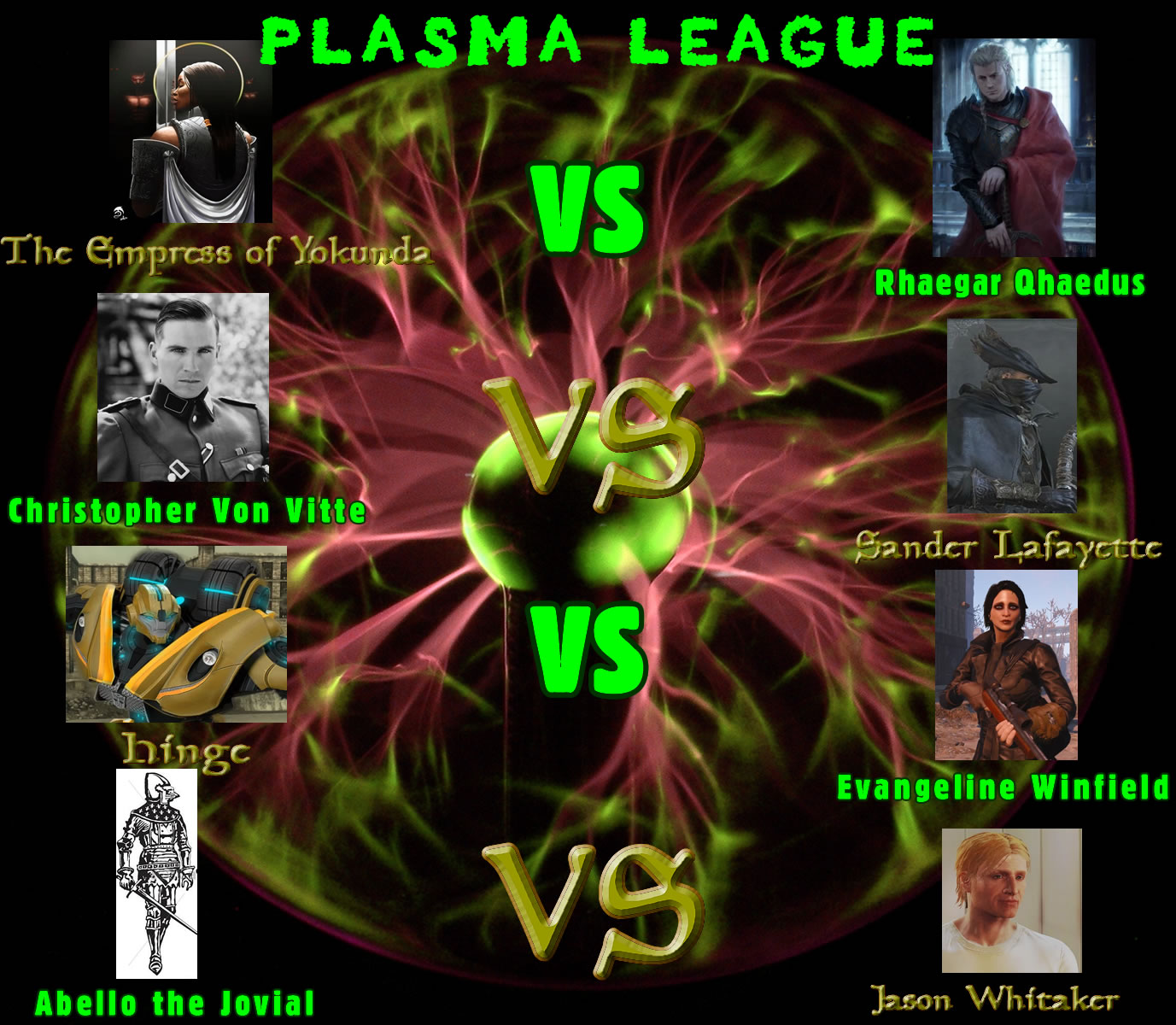 Welcome, all you Plasma Spazzes! Time for some white hot liquid death!

A powerful Empress, who ruled over Yokuda, right to the end, when it was finally destroyed in 1E 792. A rebel Queen, who overthrew the last tyranical Emperor. She had to compromise and marry the wretched bastard but at least had the sense to murder him afterward. This fiesty young gal was so impressive that the Godess Leki adopted her as a daughter.

She is well versed in the Way of the Sword and fights just as well on her own as she does in a unit. She is clever, skilled and smokin' hot. One of my favourite combinations out there.

Her opponent is Rhaegar Qhaedus, the known owner of half of the slaves in Lucism and has been re-elected so many times that he might as well be a monarch. Hmm, him and Thomas Hamilton would get on like a house on fire.

He is a skilled combatant, who has even trained Gladiators and Gladiatrixes, even selling a few on as slaves. Hopefully he's one of those teachers that actually knows what he's talking about or else this will be embarassing...

Christopher Von Vitte is the Supreme Leader of the 'New Order,' who are like Thalmor on steroids. He hopes to take over the entire world, of post apocalyptia.

After his home was trashed, he went on a long and spiritual journey, that ended up with him murdering and enslaving a bunch of mutants.

He and his New Order have taken up arms and have begun their crusade to force the entire US of A to kneel to their fascist wims.

Sander Lafayette, if his lightning fast sword doesn't kill you his... rapier wit will.

He is no stranger to this arena or to combat in general, he is a master of the weapons of both worlds, from handguns to swords. He was unfortunate enough to lose his farm to Jack Jackson. Oh well, at least he was attacked by a guy with a cool, if not difficult to believe name.

He has since dedicated his life to the shadow arts, being a spy, thief and sometimes an assassin. Add onto this his vampiric abilities and you have a truly dangerous entry to the Golden Ash Yam Tourney.

Hinge is a long-time Autobot and has grown rather bitter in his old age. Mostly, because he has spent his whole life fighting the same Decepticons over and over again. He serves as a second in command to our other Autobot Contestant 'Steel Sentinel'.

He is a reliable fighter, who doesn't let his age keep him down. He is experienced, and battlehardened, through and through.

His opponent is Evangeline Winfield, is a Witch of Salem. An organization who hunt the whicked to the ends of the world and take them out. She does this with several Cybernetics, a Revolver and a powerful Sniper Rifle.

She too has been to New York, around the same time as Hamilton and Morgan, though they didn't cross paths until much later. She was able to defeat Clive, a deadly artificial intelligence, who I'm pretty sure shares a name with one of my uncles.

This should be a very interesting bout, technology vs touched by tech. I'm practically giddy with anticipation!

Abello the Jovial VS Jason Whitaker

Finally we have Abello the Jovial, a jolly friend of the undead, who is frustratingly about make merry during a bad situation.

He sports some 'royal knight armour' and wields a fine silver shortsword. He once travelled with a group but they eventually went mad and died. A lot like most companionships... and drinking buddies.

He is up against the Mayor of Pillartown, Jason Whitaker. He had a bad role in life, when his mum popped her clogs during child birth and his dad got capped by an unknown assailant. He then grew up seeing how dickish the law in his town could be, until the Royal Order took the settlement.

He founded his little town on the ruins of the British Museum, which eventually fell to the Royal Order.

Two rather interesting figures here, men of mystery as it were. Hopefully we can see their true power in the light.

Retrieved from "https://fallout-gravel-pit.fandom.com/wiki/User_blog:Psychomantis108/The_Golden_Ashyam_Tournament_2019_Plasma_League?oldid=59431"
Community content is available under CC-BY-SA unless otherwise noted.