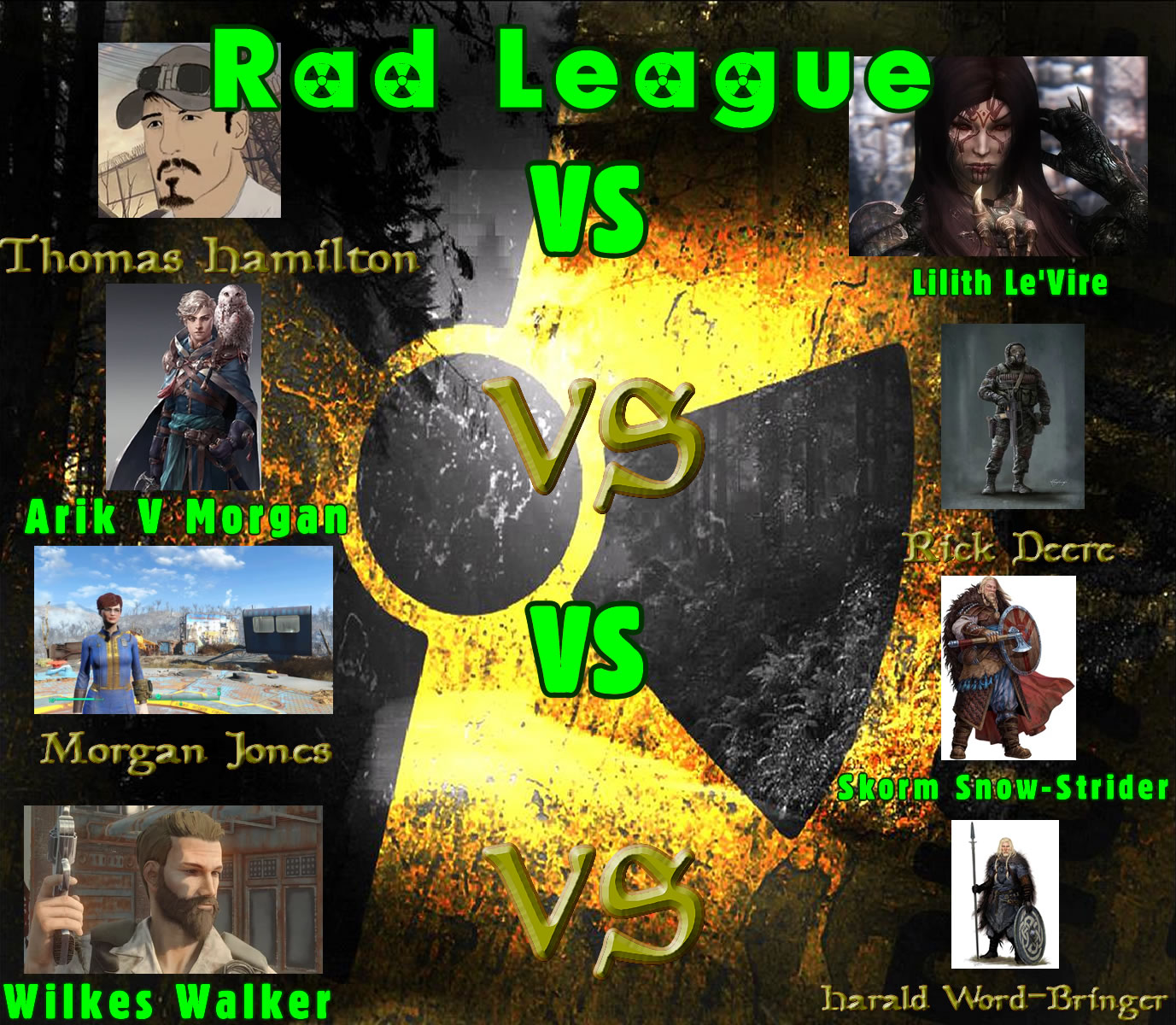 Feel your skin prickling? The churning in your stomach? Your heart beating out of control? That's hopefully excitement and not radiation.

It is I, my dear children, the Arena Announcer!

I have come to watchover some of this world's and the my home world's best champions!

Our first contestant is Thomas Hamilton, a mass murdering, child killing, slaver from the Capital Wasteland. He has spent quite a bit of his time in New York, where he encountered Morgan Jones, another one of our competitors! He has since joined Shrike, who will hopefully rid him of his greatest rival, Denis Callaghan, once and for all!

He will be facing off against lovely Lilith Le'Vire. Half Breton, half Bosmer and all powerful. She specialises in some serious dark magic, being alive for nine centuries and still enjoys the blood, gore and chaos of battle.

Man, these two would be evenly matched at a speed date but how will they handle as opponents? Let's find out kiddies!

Our next fight is between two others from different worlds. In the Blue corner, we have Arik V Morgan, the 5th member of his family to bare his name and a Prince of Tamriel by birthright. He had to learn to stand up for himself, after being picked on for so many years, by his asshole brother. This is something that I know about, since my Brother had the same problem.

With training from both the Penitus Oculatus and the Fighter's Guild, the odds seem to not exactly be stacked against him.

His opponent is Rick Deere. An Old World army veteran, who went zombie, after he was exposed for too much radiation. He now works as a mercenary.

He lied about his age to get into the military and served until he had to retire in the great war, taht ended everything in his world. He was able to survive it but quite a lot of his humanity died.

He is well trained with various types of weapons and very experienced and has little to no regard for human life. Perhaps he would make a great regular at the Arena after this.

Well, isn't this nice? Two old friends, in the same league!? Well, provided that Morgan gets over the whole... being shot in the back thing, by Mr Hamilton. I wasn't very forgiving, when I was shot, so... I doubt that'll happen.

Morgan is a gifted inventor from a town that never appreciated her, so she ran away and lived in isolation. She eventually met a man who could satisfy her in every way possible, a synth, by the name of Rook. Synths are to humans, what Tofu is to meat. They aren't the same thing but if you close your eyes and preted, it might as well be.

She is capable of using a variety of weapons, usually belonging to the energy weapon family and has several robots to back her up. Is that allowed? I dunno, who cares?

Her opponent is Skorm Snow-Strider, a burly housecar to Harald Word-Bringer, who is also in this contest.

Apparently he is descended from a legendary hero (Rikvard Who-Strode-Through-Snow), one of the five hundred companions.

He is apparently a tough one, who has tangled with Draugr, the Dragon Cult and even Harald Word-Bringer himself. Experienced with enchanted war axes, shields as well as a number of other deadly weapons, he should prove more than a match for Morgan.

Wilkes is a convicted fellon from the NCR, a former miltary man, who was framed. Being framed is the worst as you don't even get the satisfaction of doing the crime. He has since signed onto Project Cook, eventually becoming the community's leader but he left this position behind to save his girlfriend, Harriot Walker from the devilishly evilDaniel Starling.

Despite having a leg injury, the limits his movement capabilities, Wilkes is still very formidable, with his suit of Power Armour. He is also well trained in the use of fire arms and has apowerful revolver at his side.

His opponent is Harald Word-Bringer, who, despite his name, is not a poet, a Disk Jockey or rythm and blues artist. Harald is a powerful master of the thu'um. He is ambitious, honourable and an incredibly brave fighter, a deadly combination

He is proficient with the spear and has his own legendary spear, known as Gungnir. He also has some rather impressive steel, fur and leather armour to protect himself with as well as the Amulet of Ysmir.

Wilkes might need some bulkier power armour for this one...

Let's enjoy this glowing example of sportsmanship. Open the polls!

Retrieved from "https://fallout-gravel-pit.fandom.com/wiki/User_blog:Psychomantis108/The_Golden_Ashyam_Tournament_2019_Rad_League?oldid=59402"
Community content is available under CC-BY-SA unless otherwise noted.