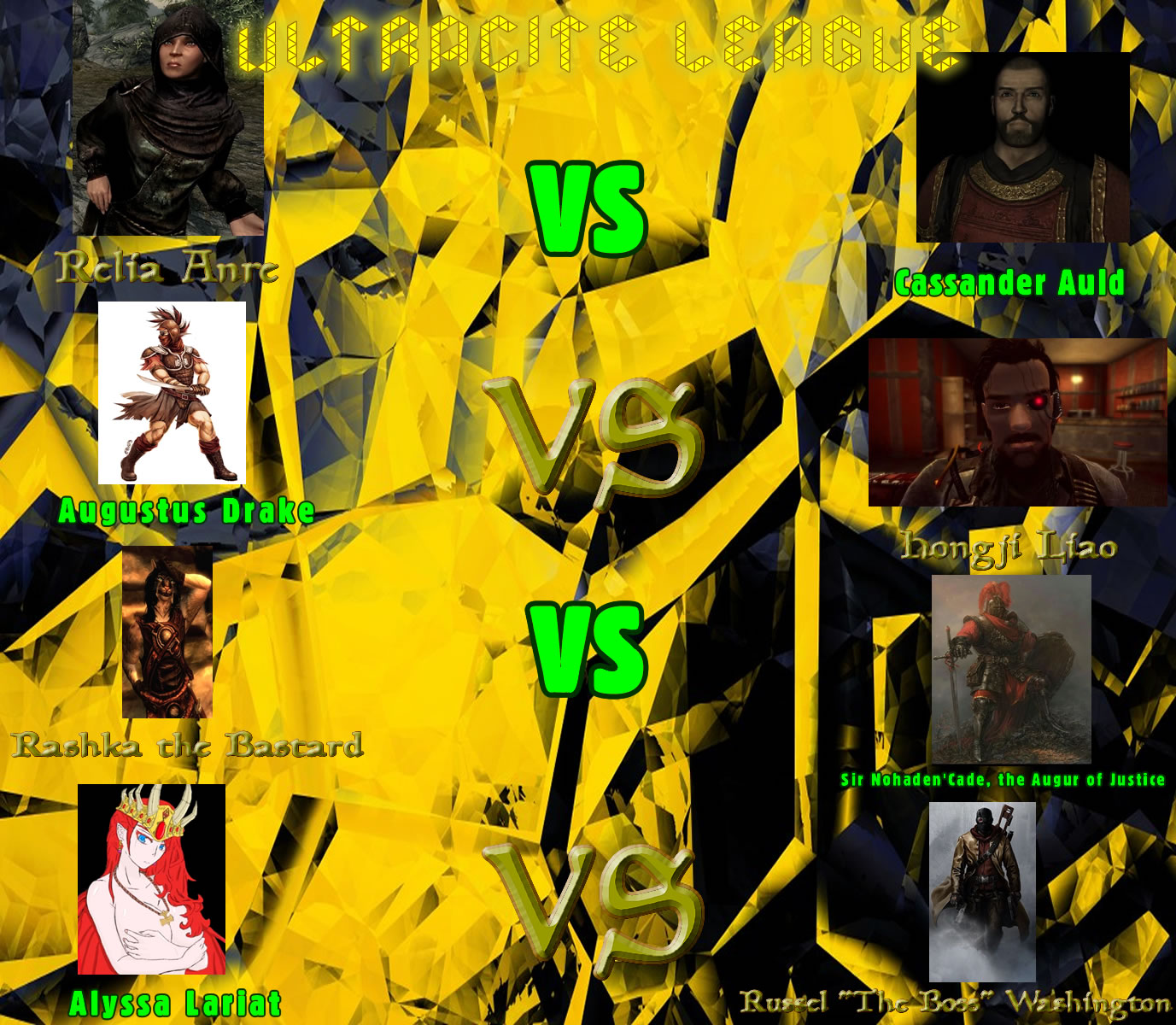 In this league, the contestants are a rare kind of tough.

Only one of them will be good enough to be the Ultracite Champion!

Staying on the home team, with round 1, we have Relia Anre, a mysterious Necromancer, who likes to haunt Whiterun. She is the leader of the dodgy Embershard Brigade, a group of bandits, who rob other bandits.

She does have a creepy obsession with the dead, though I guess there's a downside to everything. She is very skilled with necromancy (shocking, I know) and lightning attacks!

Her opponent is Cassander Auld, the Breton King of Daggerfall. Oooh, royalty in the arena? How old hat...

He was taught how to be a knight in every way, being both proficient in combat and in manners. He has fought for the Crowned Phoenix Guard as well as the Eastern Rebels. Needless to say, he is hardly a pampered young flower at this point.

Seems like a fun match up, I do love bringing two supernatural abominations together. Hopefully Cassander will trat Relia like a lady as he rips her guts out.

The opposite of our last fight, now we have two outworlders going head to head!

The first of them is Augustus Drake, a Decanus of Caesar's Legion. He was kind of forced to leave, after Caesar himself kicked the bucket, somehow Lanius' Legion just didn't have the same ring to it.

He was born, due to the... most likely unpleasant union of a Legionaire and a slave. Oddly enough, this gave him a bit of a sympathetic edge to the slaves he met. He actually fought in and survived the second battle of Hoover Dam and even the Battle for Shady Sands. He eventually earned the rank of Decanus.

Oof, quite an accomplished warrior, though his opponent is not pushover either.

Hongji Liao is a test subject and scientist of the Shi. Hongji has a bit of a grudge against the Legion, after they invaded and sacked his lab and killed a bunch of his colleagues.

He has several advanced cybernetics, that practically make him immortal. He is very willing to fight to the death for people he actually likes. The rest? Not so lucky...

This should be a fierce battle, I hope so anyway!

Rashka the Bastard VS Sir Nohaden Cade, the Augur of Justice

The winner of the first Golden Ash Yam tourney graces us with his presence again. He usually does amazingly in the tournaments, winning nearly all of the fights, if not the tourney itself.

The irremediable womanizer, who has seduced countless women, through compliments, lies and flirtation. More of a lover than a fighter but he does have some well made daggers, that he definitely knows how to use. (Provided that he knows he can win...)

Cade, companion of our other contestant Graicus is his opponent. He is very pious, chivalrous and well trained. Singled out as a squire for his truly unique talents, he was given specialist, seperate training. He earned his title of 'Augur of Justice' after slaying a Daedric Titan, on the hillside.

Oof, has Rashka met his match? Hopefully, that'd make it a much more interesting fight.

We end this league's matches with some cross world action. Tonight I bring you the powerful Alyssa, the Leader of the Dragonslayers.

Alyssa has walked the path of the Last Dragonborn, she has walked the 7000 steps of High Hrothgar, was trained by the greybeards and used this power to kill countless dragons.

She hopes to one day take the Empire back to its roots of order and discipline.

Well, unfortunately, the Boss is no Dragon. He is a rather angry, Ghoul (or mutant as he became), who helped found the Brotherhood of Steel.

He grew up in the old world but was familiar with the themese of this one, due to the rampant gang culture. He went on to join the army and after years of fighting, he ended up one of many victims of the war to end all wars.

He has survived the unforgiving North Frontier, the crazy World's Fair and even himself in Chicago. He is old, angry and determined to stick out his war, with the world for as long as possible. Since birth, it's been him against the world as it wouldn't be fair otherwise.

This will be one hell of a matchup, let's not delay any longer!

Retrieved from "https://fallout-gravel-pit.fandom.com/wiki/User_blog:Psychomantis108/The_Golden_Ashyam_Tournament_2019_Ultracite_League?oldid=59451"
Community content is available under CC-BY-SA unless otherwise noted.