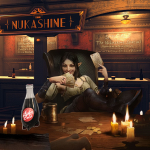 I've taken the liberty to change the tabber to something similar to the Sandbox's tabber, except green instead of tan. I think it looks better this way.

Yeah. I thought it looked pretty nice. Speaking of which, my signature is not working in this wiki. I don't know why. How did you make yours work? {{SUBST:Signature|Harold Burned-Mane}} 12:09, December 12, 2015 (UTC)

Nah, it's chill, I just wanted Saigh to let you know of the timeskip. (How do you change signatures btw?)

You still around and if so can you keep posting so we can end it with my NCR ranger safer inside the walls or at least safe somewhere? Also I was thinking of this concept that ranger samuel has a radio because his job was to see if the settlement was worthy of support other than "new recruits" (convicts) being sent to bolster the settlement's numbers. When I say support I don't mean the NCR sending ground troops or non-convicted settlers to the settlement but rather by weekly or monthly supply drops of items requested by (Samuel and the group over) the radio. What I'm suggesting is that Ranger Samuel is like a liaison to the NCR. Just an idea. The.Brick.Battle (talk) 00:03, September 21, 2016 (UTC)

Ok good. thanks for the food for thought also in not saying the NCR care that much but they have to care a little bit about a NCR ranger but not enough to send him help. The.Brick.Battle (talk) 17:52, September 21, 2016 (UTC)

Did you delete Fallout: Frost?

So Fallout:Frost is a thing again...

And I'm just wondering if you were going to still participate and if you thought anyone from BIB might like to join to. Thanks. The.Brick.Battle (talk) 19:32, April 21, 2017 (UTC)

Sorry to be a bother

Also i might rejoin brothers in binds as the ranger and his motley band... but im just going to say he got a bionic eye in my absence as that whole incident in the tent was rather weird. Also anyone else might want to play fallout: frost? Maine Nationalist (talk) 12:57, May 24, 2017 (UTC)

Is there any sort of universal character card that I should be aware of after arriving here?

Hey, I've been wanting to join your Fallout RP, but I'm a bit confused as to the difference between background and backstory, as well as not knowing what has recently happened (BTW, for next thread, might want to put the links back in description thing at the top.) If you would be so kind as to show me de wae (jk), the difference between them and a light summary of recent events and any need-to-knows, I'd be happy and just about ready to join, unless you have a reason for me not to.

Where might I put the weapons they are equipped with?

Like if I have a 9mm and laser pistol, where would that go? or would I simply not have such things?

Sorry for so many questions, I like to be sure I'm doing things right and canon to the RP, so my Backstory is:

Dameon was a skilled car mechanic and repairman for his town. He often repaired farming equipment, weapons, armor, appliances, and many other odd trinkets. He was able to fine-tune cars, make them in great condition, but fuel was hard to find. So his town had many nice cars sitting around. That is, until his town was raided, he lost nearly everything, he killed a few, but the numbers were many. Most of the town was either scared or dead, Dameon ran away as soon as he could with nothing but a laser pistol and a 9mm. He trained with the weapons and used his skills to make caps, he has continued moving west from his old home in hopes of a better life somewhere.

It looks right to me, but please let me know if it doesn't fit. For later reference: If anything I do is wrong, please correct me.

Just Not feeling it

Hey, I'll be taking a break from the RP, I'm just not feeling any of it anymore.

Why did you ban me from the walking dead wiki you piece of shit? why

The definition of insanity...

you son of a bitch please I beg you! unban me!

Retrieved from "https://fallout-gravel-pit.fandom.com/wiki/User_talk:Psychomantis108?oldid=47823"
Community content is available under CC-BY-SA unless otherwise noted.